Who is the poet Aousha Al-Suwaidi Arab girl? 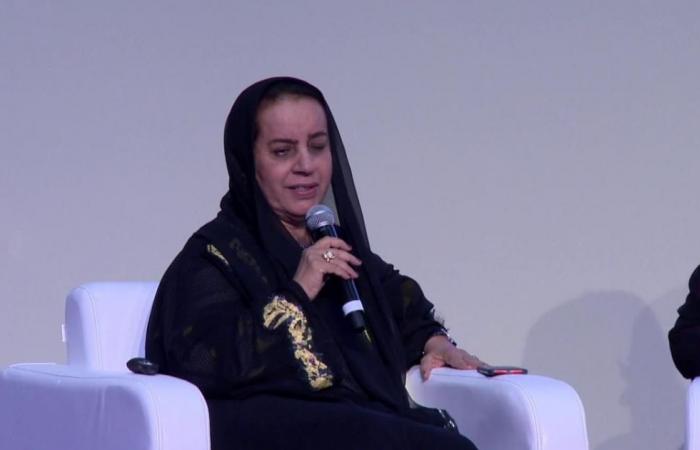 Today, Monday, November 28, 2022, the global search engine Google celebrated the Emirati poet Awsha Al-Suwaidi, nicknamed the Arab Girl, as many do not remember this authentic Arab poet, who was distinguished for Nabati poetry.

Many began to ask who is the poet Aousha Al-Suwaidi, who is associated with the Arab girl, especially after the Google search engine celebrated her on its official pages, as we list for you in this report the full details of her life.

Khalaf Ahmad Al Habtoor, Founder and Chairman of the Al Habtoor Group, wrote: “Aousha bint Khalifa Al Suwaidi, “The Arab Girl,” is an exceptional personality that I knew closely. She is truly a great woman. To perpetuate her poetic legacy, honor her stature and poetic talent, and consolidate the role of Emirati women and their influential presence in the cultural and literary arenas.

Awsha bint Khalifa Al Suwaidi became an icon of word and thought because of the deep meanings her poems contain, inspired by the desert of this blessed land. The announcement of the launch of the award coincides with the centenary of her birth (1920), as an honorable Emirati symbol and role model for the women of the country.

The Arab Girl Award will contribute to shedding more light on the Nabataean poetry that our region (the Gulf Cooperation Council countries) is famous for, especially the poems of Aousha bint Khalifa Al-Suwaidi because of the eloquent vocabulary and images they carry, so that whoever reads her poems is amazed at her fertile imagination that transcends geographical and cultural borders.

Poet Awsha bint Khalifa Al Suwaidi, may God have mercy on her soul, a literary figure and a great symbol in the history of the Emirates… We are all proud and proud of her.

The poet Awsha bint Khalifa Al-Suwaidi, Girl of the Arabs, is the Emirati poet Aisha bint Khalifa bin Sheikh Ahmed bin Khalifa Al-Suwaidi, born in Abu Dhabi in 1920 and resided in Al-Ain most of her life, except for the period she spent in Qatar (almost fifteen years), then she returned to Al-Ain again After that, she moved to Dubai in the late eighties, and according to Awsha, the place was not just a patch and a geographical extension, but rather had its repercussions and implications in her poetry.

Awsha grew up in a house of knowledge and religion, and men of knowledge and sheikhs did not leave her father’s council. At the age of 12, she began writing poetry, and composed 100 measured poems in about a month. She is one of the pioneers of Nabati poetry in the UAE and the region, and her poetic experience is considered a milestone and an important transitional stage in the journey of Nabati poetry.

Aousha bint Khalifa Al Suwaidi contributed to bringing the Emirati poem to new horizons of spread, and her poems are considered a witness to great historical social and literary transformations in the Emirates in particular and the Gulf and the Arabs in general. Her words were sung by many artists, such as Jaber Jassim, Ali bin Rogha, Mehd Hamad and many others.

During her career, Aousha Al-Suwaidi presented many poems in various fields of poetry, such as spinning, social criticism, praise and Islamic studies, and was influenced by Al-Majidi bin Dhaher and Al-Mutanabbi. Bin Hilal Al Dhaheri, and her poems were published in many newspapers and magazines, as well as audio collections that were collected in the collection of “The Girl of the Arabs” in 1990, by the poet Hamad bin Khalifa Bu Shihab, of which a second edition was published in 2000.

Poet Awsha bint Khalifa Al Suwaidi won the Abu Dhabi Award at its fifth session in 2009 in recognition of her poetic efforts and giving.

She retired from poetry in the late nineties and continued to recite her poems in praise of the Messenger, may God bless him and grant him peace.

Calling her the Arab girl

Aousha Al-Suwaidi was initially known as “The Girl of the Gulf”, until His Highness Sheikh Mohammed bin Rashid Al Maktoum called her the “Arab Girl”, after honoring and imitating her the Medal of the Principality of Poetry in the World of Popular Poetry in 1989, when His Highness gave her a collection of poetry issued as a dedication. In it he said:

A collection of proverbs that he paid

It contains an example of everything that zen

From each role in his contracts Nddha

Arab girl and you have the best address

And without you with the intention of seeking meanings.

The poetess who swallowed the moon:

One of the funny stories told about the poet “The Girl of the Arabs”, who stopped writing in the nineties, is that she dreamed in her youth that the moon descended from the sky and swallowed it, so some interpreted this dream at the time that she would have a verbal talent, which was actually achieved as she became a unique poet, The irony is that she died in conjunction with a rare lunar eclipse that will not be repeated in the current century again.