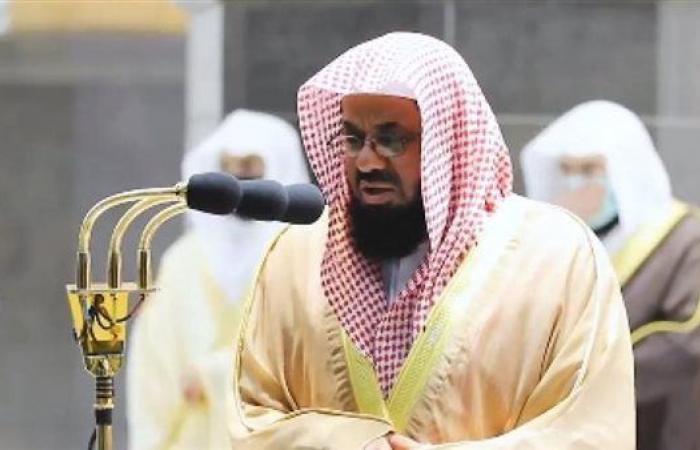 The name of Sheikh Saud Al-Shuraim, one of the imams of the Grand Mosque in Mecca, was issued during the past hours.

Where social networking sites were buzzing during the past few hours with the news of Saud Al-Shuraim’s resignation from the Imamate of the Haram, based on a personal request from him, which he submitted to the Presidency of the Affairs of the Two Holy Mosques, after consulting those in charge of the affairs of the imams and muezzins.

So far, no official decision has been issued by the Presidency of the Affairs of the Two Holy Mosques or the affairs of imams and muezzins in the Kingdom of Saudi Arabia.

Who is Sheikh Saud Al-Shuraim?

Sheikh Saud Al-Shuraim is considered one of the most famous reciters of the Noble Qur’an in the world. He was known for his melodious voice and delicate feeling. He has a wide knowledge of the rules of recitation of the Noble Qur’an, its principles and rulings. His style is sober, sober, and influential, and his recitation is smooth, expressive, and precise. He recites the Holy Qur’an with the reverence of the worlds and the genius of the gnostics. He transports the listeners to the worlds of spiritual purification and psychological serenity. His strong personality and humble nature give him an aura of respect and give him a tinge of dignity. For Muslims in the Great Mosque of Mecca, it is about the Saudi reader Sheikh Saud Al-Shuraim.

Sheikh Saud Al-Shuraim, whose full name is Saud bin Ibrahim bin Muhammad bin Ibrahim bin Nasser bin Ibrahim bin Muhammad bin Shuraim, was born in the year 1965 AD in the city of Riyadh in the Kingdom of Saudi Arabia to a family of lineage and lineage. He grew up since his childhood in a conservative environment that gives Islam the appreciation and attention it deserves, and gives the Holy Qur’an special care and boundless concern, which affected the formation of Saud Al-Shuraim’s personality, and contributed to his attraction to the Book of God Almighty, so he clung to it, learned it, and set about adjusting the rules of its recitation and recitation.

Sheikh Saud Al-Shuraim began his educational path at an early age, so he joined Areen School during the primary stage, and the Model School during the preparatory stage, then the Yarmouk Comprehensive High School during the secondary stage, from which he graduated in 1984 AD, after that, he joined the Faculty of Fundamentals of Religion affiliated to the Imam Muhammad bin Saud Islamic University in Riyadh He specialized in contemporary faith and doctrines, from which he graduated in 1989 AD, then joined the Higher Institute for the Judiciary, where he obtained a master’s degree in 1993 AD, to culminate his academic path by obtaining a doctorate in jurisprudence from Umm Al-Qura University in Makkah Al-Mukarramah in 1996 AD.

In parallel with his rich and distinguished academic path, Sheikh Saud Al-Shuraim received a parallel training in Sharia science, but in an oral form, as he regularly attended dhikr circles and sermons in mosques, religious institutions, and others. He also learned the Noble Qur’an and memorized it from a number of prominent scholars and sheikhs, such as Sheikh Abdul Rahman Al-Barrak, Sheikh Aqeel bin Abdullah, Sheikh Abdullah Jibreen, Sheikh Abdul Aziz Al-Rajhi, Sheikh Abdul Aziz bin Baz (may God have mercy on him), Fahd Al-Hameen and others.