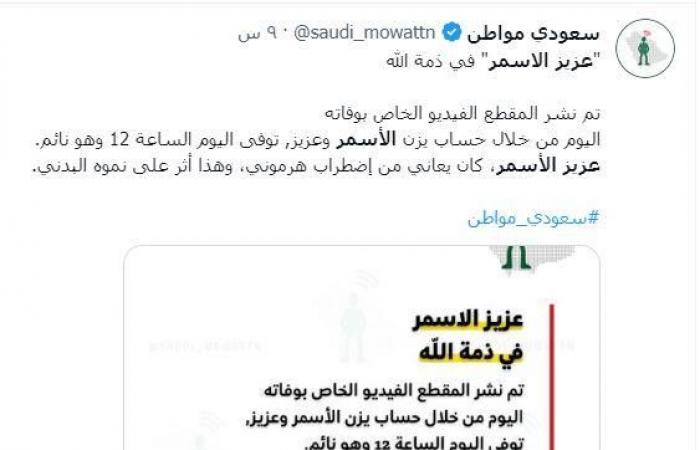 Aziz Al-Ahmad, or Aziz Al-Asmar, the famous Saudi YouTuber, died suddenly, on Thursday, at the age of 27, in a hospital in the Kingdom of Saudi Arabia, after suffering from a health ailment, after which he entered the hospital to receive treatment, but he died, and his fans received the news of his death like a thunderbolt, especially since they were associated with He fell emotionally because of his frequent appearances on social media.

The news of his death sparked a great deal of grief among the social media audience, who was emotionally attached to him.

Aziz Al-Ahmad was famous for his videos that brought joy to the faces of millions on social media, as his videos garnered millions of views.

Aziz Al-Asmar’s hashtag topped the trend of social networking sites, especially Twitter, amid a state of grief over his death.

Who is Aziz Al-Ahmad?

He holds Saudi nationality, 27 years old, born on August 26, 1995. He became famous on social media for his funny videos, and is considered one of the most prominent Saudi comic personalities on social networking sites, especially Tik Tok. He gained wide popularity because of his different appearance and distinctive features, until he was called Koksal, Baba of the Arabs, was famous for his wit on social media, and gave him the title of Aziz the Dwarf.

Aziz Al-Ahmad disappeared before his death from social media, and it turned out that he was going through a health problem, and his followers were surprised by the news of his death.

Aziz Al-Qozm was born with a genetic disease due to hormonal disorders in his body, which caused problems in the shape of his body. His family tried to treat him in many stages of his life, but to no avail.

He was called a dwarf, not to bully him but because of his short stature.

It is said that the YouTuber, Aziz Al-Saudi, is married and has a child at the age of one month. He lived in Saudi Arabia and traveled to several stations in the Arab world, and appeared several times in videos with Maryam Kouki.

He possessed a huge wealth that was difficult to count. Throughout his fame, he used to appear in huge palaces and hotels, in addition to his appearance in luxury cars that fit the size of his fame that he gained from social media. Some press reports mentioned that Aziz Al-Dwarf’s wealth is great, he lives in a luxurious house, and owns cars and money in banks. But the reports did not mention the amount.

And the official page of the famous Saudi YouTuber, on Instagram, published a picture that read, “May God have mercy on you, dear.. We belong to God and to Him we shall return.”